We are the creative force of our life, and through our own decisions rather than our conditions, if we carefully learn to do certain things, we can accomplish those goals. (Stephen Covey)

This week I had a “Performance Diagnostics” and it was so great to see how 14 month of workout, training camp and competitions pays off.

Thank you Jürgen Trapp from Sporteffekt to make this diagnostics and your great hints how to improve further.

Even with two major draw backs, those months led to big changes and the confidence to participate in my first Olympic Triathlon this year on 14th June 2015 in Ingolstadt, Germany. Thank you trainings partners, coaches (especially Sabine Schlirf from ESV Ringsee Ingolstadt) and friends. Without you this wouldn’t have been possible. Because even if it looks easy and relaxed, it is all hard work but with lots of fun.

Here some impressions from the last 14 months:

“Yoga at sunrise” in Croatia

Relaxing after one week training camp

Ready for the week in Porec. Croatia

Another great morning sunrise with Yoga on the beach in Porec, Croatia 🙂

Loved the scenery in Rovinj, Croatia

Hard work pays of, ok there were only 3 participants in this age group 😛

Great first competition in 2015 together with Sandra, Sabine, Isi und Manuela in Munich 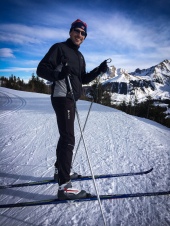 Trying out a new sport: classic cross country skiing, so much fun

Thank you Janett and Jörg for showing me this great sport near Bern, Switzerland

Berlin before the flu

dislocated my shoulder in November 2014 😦

Lets make the best out of it 🙂

It looks fun, but this is actually quit boring, well for next year I have to find something else …

Running at the Alster in Hamburg

Train trip to Hamburg for my third Triathlon in 2014

Awesome exercises for the triathlon

Crossing the finish line at my first Triathlon competition

Weather in Malaga, Spain was not always the best

The training group in Malaga, Spain so great!

Thank you guys for introducing me to the cycling

Ready for my first race bike ride in February 2014 in Malaga, Spain